You are here: Home  /  League 1 News  /  PSG made his comeback before the break
League 1 News

PSG made his comeback before the break

With the way the PSG has managed to reverse the negative spiral. New thing, PSG did not goals

The decision to put Trapp in goal has proved successful.

Despite the turmoil, Unai Emery had maintained his confidence in Aerola. No return.

This victory offers an incredible breath of fresh air with goals of Miller. A Sombrero then a lob cross on the goalkeeper. Magnificent. Perfect start to a lovely evening.

The four goals we Tete marked by Thaigo Silva, Cavani from the penalty spot and Lucas on a superb opening of Verratti. The Zargo Lorient scored an own goal following a centre that finds an explosive acceleration of Lucas.

Bravo PSG! Unai strongly needed this victory with the way. PSG is up to 5 points of OGC Nice. 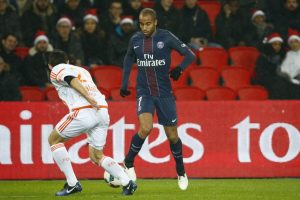