You are here: Home  /  League 1 News  /  Lyon and Monaco at various fortune

Monaco and Lyon respectively faced Saint Etienne and Toulouse. One to catch up with OGC Nice, the other out of crisis.

Saint Etienne vs. AS Monaco 1-1

Monaco, who, before the game, has the best attack in the League with 29 goals (as well as Europe to equal on points with FC Barcelona) have not recovered their winning formula for points of Geoffroy Guichard. At least to keep the pace set by Nice.

After having opened the scoring by Glik (5th) very early in the match, Monaco got join (18th Perrin) without being able to make a difference later despite a good quality game.

Monaco is therefore equal on points with PSG (but same front thanks to goal difference) to Nice 3 points before the Nice Vs Nantes match at 3: 00. If they win Niçoise this afternoon, Nice digs into the gap to 6 points of their chasers.

Olympique Lyonnais found success against Toulouse and thus end with a series of defeats in bad taste. Lyon succeeded thanks to a brace of Lacazette (15th and 52nd). Toulouse had equalized in the first half (1-1) by Julien (26th) before Lyon take the advantage of a beautiful Lacazette action.  OL found himself outnumbered in the last 34 minutes of the match after the expulsion of Rafael. Lyon is 8th in the Championship before the last matches of the 11th round. 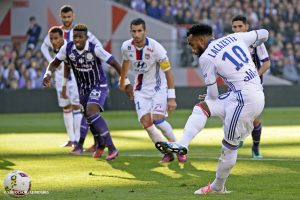