You are here: Home  /  League 1 News  /  Nice with Balotelli crushes AS Monaco

Nice takes the lead of the League 1 thanks to a brilliant victory against the team of the moment Monaco, who chained 7 consecutive wins.

A derby win with goals by Baysse, a duplicate of Balotelli, following a beautiful opening of Belhanda (30') and the conclusion of a beautiful action taken by Pereira (68') and Plea on powerful head (86'). The score could have been even heavier if Subasic had not saved a penalty from Alassane Plea on his line

The origin of the penalty, Monaco player Bacon received a red card as a result of a fault in its surface.

Nice takes first place in the standings with 14 points ahead of PSG and Monaco. 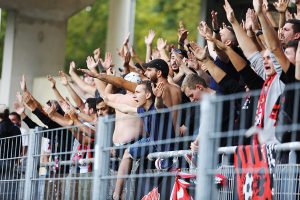