You are here: Home  /  Friendly-tournament  /  PSG in demonstration in the ICC tournament

Winner 4-0 facing Claudio Ranieri Leicester club champion of England, PSG has issued a match with realism reached front of the goal.
Yet, Leicester was dangerous. Their players have missed efficiency before goals (non framed strikes or Aerola spectacular stops).

The team of Unai Emery scored by Edinson Cavani on penalty (26'), Jonathan Ikoné on a beautiful recovery (45'), Lucas Moura of the head following a superb action collective (64') and Odsonne Edward on the cross-strike (90').

PSG, winner of the ICC tournament like last year

PSG finished his tournament with 3 successive wins: against Inter de Milan, Real Madrid and this morning facing Leicester. In total 10 goals scored for 2 conceded. In other words, it is the best team of the International Champions Cup tournament.
PSG prepared to the best of the ways his season. Its main objective will at least the semi-finals of the champions League.

Statement by Hatem Ben Arfa, returned to the second period:

"The course was very well held, in very good condition. It took pleasure in practicing here. We will prepare for the reality of the competition.  (…) I adapt well personally, I think that everything goes well for me. "
allowfullscreen &gt;
Relive the match PSG vs. Leicester: goals and… 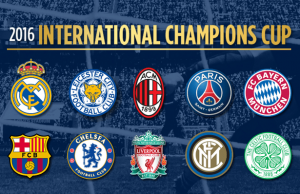 Emery delighted his strength by footmercato